My hands are getting increasingly f*cked up

I hope my mom appreciates that voluntary censorship I just did on her behalf. She always feels great shame when I curse on Facebook. (it's true, if you're a good parent your kids won't curse on FB, if they do it means you've failed somehow... probably because you didn't love them enough)

So, my hands. I have a blood blister, multiple "flappers" (what Nathan calls it when a divot of skin peels almost off, but not completely) and various scrapes/cuts. It's from going to Dogpatch Boulders, where I spend an hour couple times a week trying (and mostly failing) to climb V1s. I don't mind the hand damage. It's a physical reminder of time spent practicing something. Hoping with time my grip will get stronger, and I'll be able to get up more routes. I want to experience progress, that enjoyable sensation of gradual improvement over time. At the moment bouldering seems like the best bet for doing so.

Stuff is going on in my life, but I don't feel free to write about it here. Maybe someday. If you know me, you probably know. If not, feel free to let your imagination run wild. (Oh come on. No, I don't have ebola.)

The difficulty level for climbing routes at the gym goes from V0 to V10. There might be higher levels, but V10 is already pretty damn hard. It's the kind of climb where holds are tiny little smooth bumps, and the climb goes into an overhang and then becomes fully horizontal, so you have to climb hanging upside down from the ceiling. Right now I can only do V0s and some V1s. Michael can do V4s some V5s. Nathan is the best of our bunch, he can do V5s and did his first V6 yesterday. It's satisfying to have these problems (that's what the climbing routes are called, problems) where there's a precisely defined difficulty level. It means you can tell exactly where you're at on the progress curve-- either you can do problems at a certain level, or you can't.

To give you an idea of what world class boulderers are capable of, here's this guy doing the hardest bouldering route in the world, "Wheel of Life." Look at his rest holds! I think the positions he "rests" in are outlawed by the Geneva Conventions.

I've also been getting the itch to try top roping-- it's the type of climbing where you rope up and have a belay partner, and you go really high. With bouldering you never climb higher than you could safely fall. At a lot of the climbing gyms around SF and East Bay bouldering seems like an afterthought; the focus is on top roping. The bouldering routes at such gyms tend to not go that high (maybe 15 feet). That's why Dogpatch Boulders is so nice-- the gym is all bouldering, and the routes all go way further up. You can still fall safely, but it's high enough that it's kind of scary, and if you don't fall right you could hurt yourself. But it's not hard to fall right. I actually enjoy dropping down from the top after finishing a climb. Once you've convinced yourself it's safe, it's quite a thrill.

Another thing that's nice about D.B. is that it's kid friendly. They have a kids climbing area and a pretty nice slide, and the kids also dig the relatively exotic, grungy, vastly padded location of the gym. Asha spends all her time running around and collapsing. Izzy enjoys climbing. Someone put it this way-- the climbing gym is basically a huge jungle gym. So it makes sense that kids would be into it! 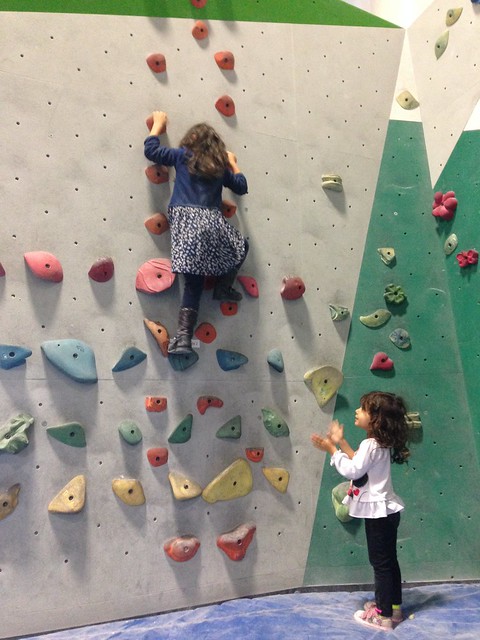 Long term, I'd love to try climbing outdoors. I think what would be best is to go w/ some experienced friends would are willing to show me the ropes (no pun intended). I just need to figure out who these friends are first. In the meantime I think top roping indoors is a reasonable goal. I forgot how to belay but Michael said he can show me, it's not that hard.

This guy Alex Hunnold does a thing called "free soloing," where you climb unaided (no ropes belays etc) like in bouldering. But unlike bouldering you do it way way higher than you could safely fall. It's pretty nuts. If you look on Wikipedia a lot of free soloers are dead due to climbing accidents. That said, it is amazing that human beings can do stuff like this.