How to fuck up your teeth in one easy step

Candy. Scourge of nations, destroyer of waistlines. Ruiner of worlds.

Fattening/teeth-destroying though it might be, we Americans love us some candy. To walk down the candy aisle at Walgreens is to celebrate FREEDOM-- the freedom to choose from a thousand and one brands of chocolate covered goo. But the price of freedom is eternal vigilance. With that in mind, I decided to check out of the less popular candy bars being sold at the local Walgreens.

I don't get what "Zero" is supposed to signify. Zero degrees Farenheit? Would only make sense if the bar was minty or breath-freshening. Zero calories? We're talking about something comprised mainly of "white fudge."

After tasting it, I began to suspect that "Zero" refers to the average number of people who purchase this candy bar per year. The coating tastes like stale yogurt pretzel, and the caramel is sickly-sweet. It doesn't even freshen your breath. 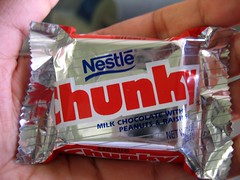 Chunky has been described as "America's attempt at [Cadbury's] Fruit and Nut bar." This is basically accurate, although the chocolate used in Chunky is abominable. It tastes like roofing tar. Also, is really a good idea to use a synonym for "fat" as the name of your candybar? It's like calling it the Nestle Lardass. Chunky isn't even that chunky! If anything, it's "blocky." This is a blatant case of false advertising.

Can you patent a candy bar? For reals, say I made a bar exactly like Snicker's, but called it Amar's Bar. Would that be legal?

The reason I ask is, as I was reviewing Mamba, I couldn't help but notice it's exactly the same candy as Starburst. Both Mamba and Starburst come in packs containing 9 or 10 individually wrapped, bite-sized blocks of fruit-flavored goo. They have a texture like melted Crayolas.

Mamba predates Starburst by at least 20 years, So if anybody's ripping off anybody, it's Starburst copying Mamba. On the other hand, the concept of "chewy, fruit-flavored blocks of goo" is not exactly rocket science. So maybe Starburst and Mamba were independently conceived.

The chief difference between the two is packaging. Mamba is much, much fancier than Starburst. You know how wedding invitations arrive wrapped in like, 16 pieces of paper, and this is because they're fancy? I think it's the same principle at work here. The Mamba wrapper contains 3 SMALLER wrapped packages, which each contain 3 SMALL individually wrapped pieces of candy! Check out how much packaging goes into a single Mamba bar: 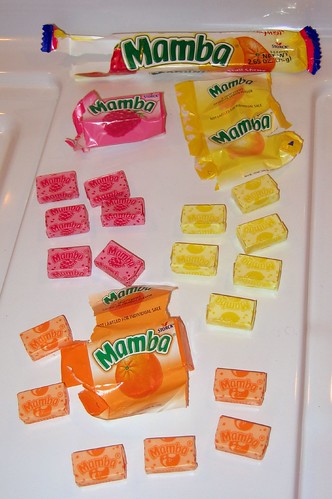 Due to the exclamation point in its name, this candy bar sounds like someone's yelling at you. If they used a question mark it would be friendlier. "LOOK? why not, dear old chap?"

Aside from the rather bossy name, LOOK! is essentially a BIG HUNK covered with chocolate. However, for some reason it has a more peanuty taste than BIG HUNK, and it lacks BIG HUNK's subtlety. For further details, read the BIG HUNK review.

The scene: late at night. I've been chewing my way through a BIG HUNK, my first, and the bar has gradually won me over with its charms. I can't stop ripping off and chewing bits of BIG HUNK. Its texture is somewhere between chewing gum and Laffy Taffy, and it has a wonderfully mild taste somewhat like Bit O' Honey. Excellent mouth feel, intriguing after tastes, long lasting flavor. This is a candy bar I can get behind!

There were ominous signs, but I was too dazzled by flavor to see them.

Not-unrelated fact: some weeks ago, my dentist put a crown onto one of my right molars. The molar in question had suffered some decay, and the crown was to help preserve the tooth's structure.

I was pulling on some BIG HUNK nougat that was stuck to my tooth, and it was stuck pretty tight. I yanked harder on the blob of nougat, and all of a sudden the crown on my tooth came off! AHHHHHHH! I felt air flow over my suddenly exposed molar. It's supersensitive to temperature. My fucking tooth just came apart! Panicked, I extracted my crown from the nougat and repositioned it over my lower tooth. I prayed to an unspecific god. When I pushed the crown back on, it fit, and when I poked it with my tongue, it stayed in place. Miraculously, I wasn't in pain. Nevertheless, I spent the rest of the night unable to sleep, tossing and turning, anticipating the horrific toothache to come. It was a long night.

In the morning, I was exhausted but still pain-free. My dentist slotted me in for an emergency appointment and reattached my crown in the morning. He was late for his kid's soccer game, and he seemed to be in a hurry. Meanwhile, I'm thinking: aren't crowns supposed to stay in place? Are they supposed to come off, ever? In a nutshell: who in this situation can I sue, and for what? Look at my claims: dental damage, emotional duress.

The BIG HUNK tooth incident has left me so terrified of this candy bar that I've been unable to have another one since then. I'm effectively incapacitated in my role as candy reviewer. For instance, I can't comment on the advisibility of eating BIG HUNK using the alternate methods suggested by its wrapper, and can only speculate as to the risks. Freeze it, then SMACK it? Sure, if you're ok with poking out your eye on a jagged shard of BIG HUNK. Microwave it? No problem, if you can deal with caustic fumes and there's a burn unit next door.

Putting aside potential litigation for now, I do want to note one interesting thing about both LOOK! and BIG HUNK!. Both of these bars are manufactured by one of the only remaining independent candy companies in America. Annabelle is a California operation, independently owned and operated since 1950. How do they survive against the Hersheys/Mars/Nestle juggernaut? Well, for one thing, they cut operatings costs significantly through by choosing to work without the services of highfalutin' "graphic designers," "safety testers" and "focus groups." That's a lot of saved dough right there.

At Annabelle's, it's about one thing and one thing only: nougat. People love nougat. Love it. Build the nougat and they will come.