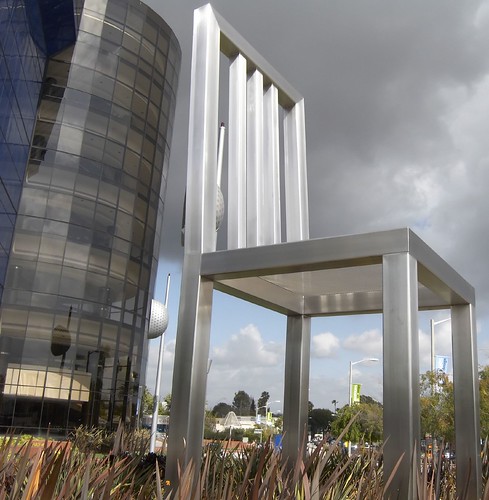 sit on the chair 2, originally uploaded by triet.

Flew in Saturday, pick up at Burbank. Triet was wearing a hip sweatshirt he got for $30 at Fred Segal. Apparently one day of the year they have a crazy sale. The sale was unfortunately not happening the weekend I visited L.A., but the L.A. marathon was. This lead to lots of

TRAFFIC! what is L.A. without being stuck in traffic? Anyway on Saturday we had awesome ramen with extra rich broth, then failed to get into the Ecstasy exhibit at the Geffen MOCA, because it was closed (forever). Back to Triet's place for a nap (and casing out his quarters, first time I'd been to visit him) and in the evening, we headed out to

Canter's -- 24 hour jewish diner, good people watching. I had the beef brisket sandwich and he had turkey pastrami, which made me think of the Mitch Hedberg joke...

I hate turkeys. If you stand in the meat section at the grocery store long enough, you start to get pissed off at turkeys. There's turkey ham, turkey bologna, turkey pastrami. Someone needs to tell the turkey "Man, just be yourself. I already like you, little brother. You do not need to emulate the other animals. I used to draw you." (Stares at hand.)

When we woke up we had some time to kill (damn, how often do you go to a concert that doesn't even start until midnight... it's not a club after all) so we went to see Dave Chapelle's Block Party (the movie). Quite enjoyed it, would love seeing Dave live. Fave moments were the lesser stars, in particular thrilling to hear Dead Prez go at it on the big screen. (It's Bigger Than) Hip Hop sounds not as good with live band because that crazy artificial bass is the best part of the song.

then off to the Orb/DNTel/John Tejada show at Disney Concert Hall. I'm so-so on the bands but we really wanted to check out the venue, and this was an ideal opportunity. The show was 12 midnight - 6 AM and it was the innagural event in the "minimal jukebox" concert series.

When we got there, ethereal blips and bloops were coming from every direction... DNTel set... it was good stuff. Our seats were nominally crap but given the style of music it didn't matter. We wandered here & there, ran into Katie who was visiting Laura, met up with all them. DNTel finished his set and some rock band came on... it was jarring. They were saying things like "how's everybody doing tonight?" and we got ornery. What the hell was a rock band doing at this show? We wandered outside trying to sell Gavin's extra ticket but no luck.

Later in the evening we were roaming searching for booze (they stopped serving early!) when we ran into Jeff. He was wearing a green wristband and offered to take us backstage. I figured he was friends with one of the DJs or something. We went through the bowels of Disney Hall, past the greenroom (chairs were green) into a buffet of cold cuts. Ooh and wine! Jeff hooked us up. We talked for a while and then he took off to help "break down equipment." I was confused... was he a roadie? It later turned out that he was actually IN the rock band we were cursing earlier! Haha good thing I didn't talk shit about them. He's a nice guy but super busy (in 3 bands , and he teaches school!)

We danced with Laura & Katie for a while when the Orb came on-- not actually the Orb, it was some other Kompakt german guy in a nicely cut suit-- I thought he looked pretty cool & the music was great. Alex Patterson on the other hand was dressed in a cheese basketball shirt and looked like eminem. His music was more out there, somewhere, and we took off not soon after. Home by 4-- fast asleep in minutes.

Next day we had breakfast at Doughboys -- I got sourdough semolina waffles with dried cherry compote & marscapone. OH MAN best waffles I've ever had.

After that we headed to Santa Monica for some shopping. Dropped some serious change at Fred Segal, this cool fashion shoppe with many boutiques under one roof. I got a really nice gray Modern Apparel sweater with blue birds all over it, and a pair of vans boat shoes. At least I think they're boat shoes.

Walking along the pier, we saw a cool temporary building made of shipping containers. It was called the Nomadic Museum and the architect was Shigeru Ban. We were too cheap to actually pay for the exhibit inside (a recurring L.A. theme; a lot of times the buildings are cooler than their contents)

In the evening, had dinner with Laura at an Indian restaurant-- there were maraschino cherries in our rice! What the hell. Topped off the night at an Irish bar with an actual Irish bartender. There were shamrocks on the ceiling with people's names on them-- apparently it's quite an honor to get your name up there, they do a ceremony and everything, but in order to get a shamrock you have to be basically an alcoholic. Triet said he'd heard of one guy who invited his PARENTS to his shamrock ceremony! "Mom, dad, aren't you proud?" I tried an irish car bomb for the first time and ended up quite sozzled.

Monday, we went to doughboys again for breakfast with Katie, then to the Pacific Design Center (aka "the Blue Whale") where Triet took pictures of a giant chair. I picked up some lingerie for my boo at a cool fashiony store that was somewhere in between Victoria's Secret grandma wear and Frederick's of Hollywood trashy.

Oh, funny-- at one point Triet and I drove past a store in West Hollywood that was called (seriously) "Skank Wear." HAHA I wouldn't have believed it if I didn't see it with my own eyes. I was trying to think of other names they rejected and the best one I could come up with was "Ho Depot."

A bit more shopping and coffee, then I was back at Burbank Airport & from there eventually home. It was a great trip & props to Triet for putting a brotha up.