I like public art, meaning art that's free, art you can touch/climb on/interact with, art that's not in a museum, art that's part of life. This is the best stuff I saw this year. Standard disclaimer: public art is what I say it is.

"Christian Marclay's celebrated video installation The Clock (2010) is composed of thousands of film clips referencing the time of day, intricately edited into a 24-hour-long montage that matches real time minute for minute — a tour de force of appropriation that is also a functioning timepiece. Marclay... spent three years assembling this staggering work, piecing together fragments from films both famous and obscure. The result, awarded the prestigious Golden Lion at the Venice Biennale in 2011, is a dazzling, genre-defying distillation of movie history, a radical reflection on cinematic duration, and a reminder that time waits for no one."

Man I was OBSESSED with The Clock this year. It was the last thing shown at SFMOMA right before they closed. At the time, my work office was only a few blocks away, so it was easy to go for an hour here and there. They start the movie at 6 in the morning (or whenever) and run it for 24 hours till the next day. Normally SFMOMA isn't open late at night, but they opened it 24 hours for a few weekends so people could see the late night parts of the movie.

Overall I think I saw The Clock 6 times. I forget what hours but something like 11-1, 2-3, 4:20 - 5, 7,9 and once late night at 11-2 (?) It's weird, there's no particular narrative to it, although some of the clips do cohere visually and the audio editing of them together is superb. And there are certain recurring themes. But there's no story to suck you in. Yet I found it completely addictive. I kept wondering what was happening in the movie at different times.

The funny thing is, when we finally got to check out the late night part of it, it was mostly clips of people sleeping or in bed!! Haha I guess that's what you'd expect.

"The Gyroid was made by the Exploratorium's Paul Stepahin, and exhibit developer Eric Dimond from a shape defined by a NASA scientist looking for structurally sound forms." A gyroid is an infinitely connected triply periodic minimal surface discovered by Alan Schoen in 1970. 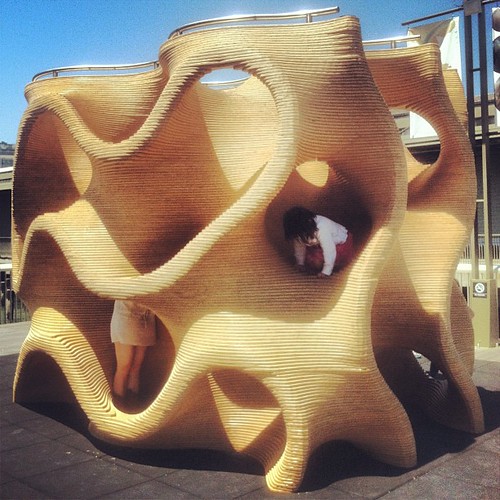 "Monkey around with this spectacular, interactive zoetrope by artist Peter Hudson. Stretching 22 feet above the Exploratorium’s public plaza, Homouroboros features a treelike steel and aluminum frame that curves like a mushroom cloud over 18 human-sized monkeys hanging from its branches. At the base of the tree are 10 drums. By pounding the drums, you can make the entire artwork spin. At 20 rpm, Homouroboros springs to animated life. The monkeys’ rotation is synced to strobe lights at night, and, during the day, to masks with shutter lenses. Your visual system combines the 18 monkeys into a single animation of a monkey swinging from branch to branch, reaching for then devouring an apple from a snakelike hand."

"Homouroboros was originally commissioned by Burning Man in 2007. The exhibition of Homouroboros at the Exploratorium is copresented by the Black Rock Arts Foundation."

"A public light installation consisting of 25,000 LEDs strung on the vertical cables of the San Francisco-Oakland Bay Bridge."

Ok, I have to admit-- even though I LOVED the idea of such a huge scale project, I was distinctly underwhelmed by the Bay Bridge lights. Every night when I biked home from work I'd stop and look at them for a while and I think, eh... that's kind of interesting... I mean it's better than them NOT being there... but it's basically like a screensaver circa 1991. Some ovals, a little rain. It's amazing from an engineering stand point but I wish there was more 'there' there. Still, props to the city and the artist for making this happen. A city that has a bridge with a trippy light show happening continuously on one side is preferable to a city that doesn't. 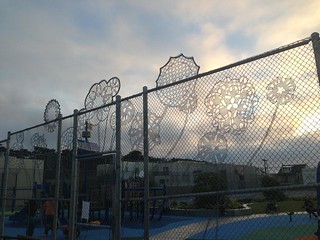 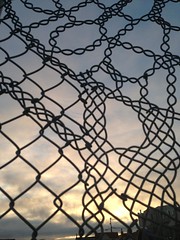 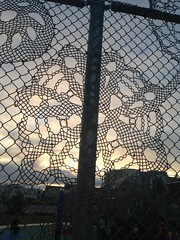 "American artist Andrew Junge created the Styrofoam Hummer when he was the artist-in-residence at San Francisco’s Recycling & Disposal Inc. Using Styrofoam scavenged from the dump, Junge sculptured a 17ft (5.2m) long, 6ft (1.8m) high and 8ft (2.4m) wide Hummer to highlight waste and consumption in North American culture." Part of the exhibit, The Art of Recology: The Artist in Residence Program 1990- 2013 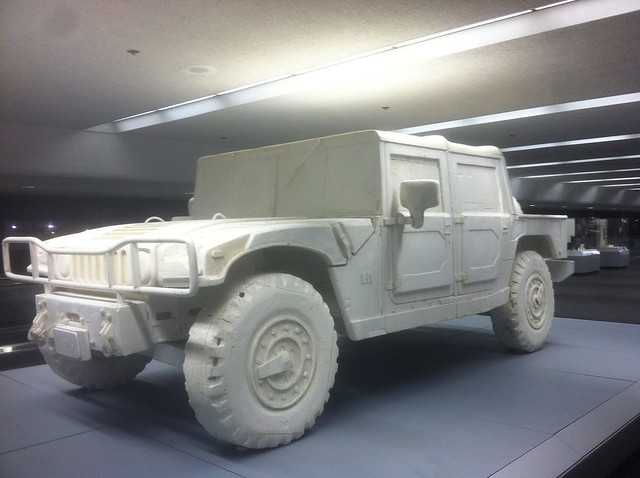 "Butterfly Wall consists of 20 hand-cranked mechanical butterflies that are propelled up a cable to gently flutter back down again in a delightful random choreography dictated by the air resistance of their spinning dichroic wings." So cool! The new SFO terminal has a lot of good art in it. Me and Izzy spent a lot of time at these, cranking the crank to make the butterflies go up and down.

"Shih Chieh Huang creates sculptural ecosystems using computer parts and common objects, such as plastic bags and bottles, which he animates in installations that mix a machine aesthetic with an organic impulse. Gathering inspiration from marine biology, Huang explores bioluminescence and its role in seduction and reproduction in the deep sea." Part of the exhibit, Synthetic Seduction - Shih Chieh Huang.

Bunch of electromechnical jellyfish, took up an entire room. Standing in the dark, there would be breathtaking moments when the whole thing stopped and all the lights died out and all the jellyfish limbs collapsed and everything went silent-- and then it would slowly wheeze and bloop to life again. The jellyfish were made of used PVC bottles and plastic bags and stuff but there was some fairly intricate electromechanical microcontroller action tying it all together.

Someone made a crazy mobile and hung it high up from a pole in Dolores Park. (mobile in the sense of an Alexander Calder sculpture, or something you'd hang over a baby's crib)

11. Halloween jack o' lanterns
At Mike Williams's house, we made jack o' lanterns. It was fun. I thought mine turned out pretty good, but then I was blown away by some of the other people's designs. They did things I didn't even know you could do. 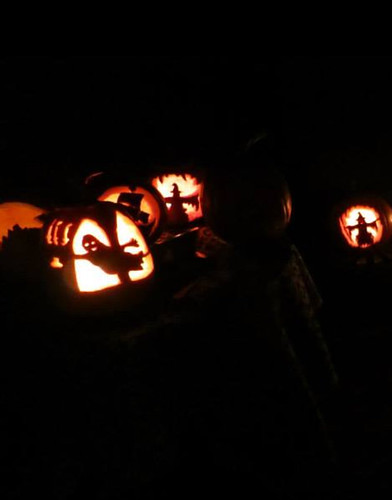 12. HEART / TRASH
I was walking home from the bus, and happened to look at the inside of a trash can. This is one of those public trash cans provided by the city, at street intersections and bus shelters and such. The word "TRASH" was carved into the trash can. But if you look from the inside out the hollow letters look green (cos of the trees in front of the trash can) and the word TRASH becomes HEART!! 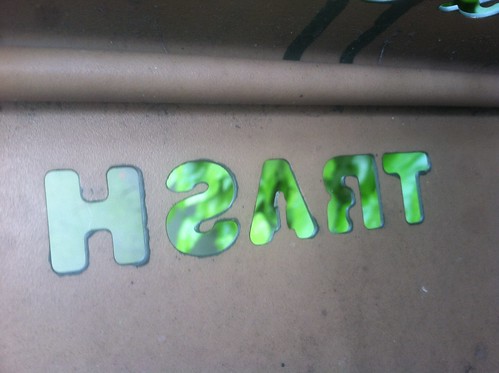 It's like a telephone made from two tin cans connected by string, except it's two satellite dish sized concrete chairs facing each other on Market Street! Parabolic acoustic mirrors, is the technical term. This was part of the Exploratorium's "living innovation zone." Also there was a musical bench that can only be controlled when two people sit holding hands. 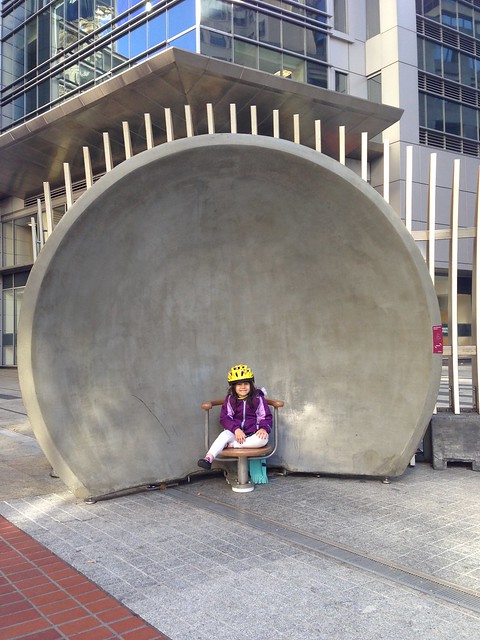