Have I woken up yet? Is this all a dream?

If so it's the most boring dream ever, I mean I'm just sitting at my desk at work. Work harder brain

I bought a beer making kit that's been sitting at home cos I'm too lazy to open it and make beer.

One thing I've struggled with after having 2 kids is how little free time there is anymore. When I DO get an hour or two of free time, I'm paralyzed with indecision over what to do with it, so I end up doing nothing! Or napping

I think a man does need long term projects aside from kids. Sometimes work fills that role. I haven't got to that point at Goodreads yet. Maybe cos I'm working mainly on ads/revenue, which wasn't exactly the dream when I joined.

I tried making a pop up book... it's harder than it looks.

There's one I have with a T-Rex that pops out. The whole book (dinosaur pop-ups, it's by some pop-up master whose name escapes me) is so gratuitous. It's basically pornography. The half-assed descriptions of dinosaurs diets and bone structure are just an excuse for elaborate pop ups of ferocious stegosauri and ravenous raptors. But I do love the T-Rex one, it's so good! With those little vestigal arms and sharp teeth 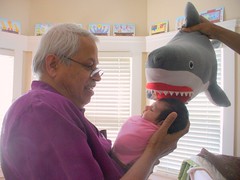 I worry sometimes that my kids aren't developing a healthy fear of dangerous animals. We have a stuffed shark, numerous fuzzy bears, snakes, wolves, I think a couple of tigers... all of which Izzy and Asha find amusing and cuddly. They laugh at the T-Rex, which is clearly trying to eat them.

What happens when they run into a shark or a bear in the wild and they try to hug it? You can't hug a shark!

Well, maybe a bear could.
Collapse