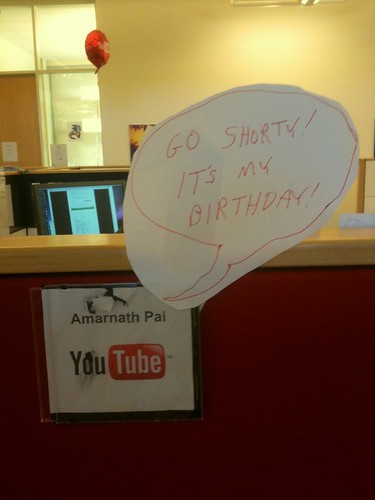 editor's note: I published this originally as a 'friends-only' entry on LJ. But hardly anybody has an LJ account these days. What's the point of having a blog if nobody reads it? Therefore, I've created this redacted version for public consumption. Don't worry, you're not missing much.

Woke up today. I'm 34 years old. Not much to say about that, one way or the other. Reminds me of a convo from a while back:

Me: 34 isn't so bad. 40 is the one that I really dread. Cos when you're 40, there's no way around it, you're old. Your body starts falling apart. Hair grows out of weird places.

Me: Yeah but you're not normal! I'm talking about normal people. You're like an elf, or an Asian lady.

Izzy been screaming a lot. I think her teeth are causing pain, plus she heard about all them Wikileaks. We gave her some advil. Now I'm drinking my Farley's coffee poured into a mug. Mmm highlight of the day

This is boring. Thus far nothing has happened on my birthday. Liska gave me a kiss. My mom gave me an envelope last wknd when we were all in Austin, that I saved for today. I think it's money? She has a pile of 100 dollar bills ([REDACTED]) and I think she peels them off for special occasions.

Ooh or maybe it's something else that just fits in an envelope! Or maybe it's a IOU for some service. Or maybe just a card saying I'm her favored son

It's not like I really want anything... well, yeah I do. Would be nice to pay down my mortgage, or get a new set of tires for my Passat. But other than that I'm the Man Who Has Everything. ([REDACTED])

I should check facebook, maybe some people have said happy birthday. Birthdays on facebook are weird. Whenever it's someone's birthday on there and I write "happy birthday!" on their wall, it feels like I'm sending them a birthday card with the message, "It's the least I could do." Which it literally is! Aside from doing nothing, I can't think of what would take less effort.

Facebook birthday greetings never make me feel good, but if I don't get any I feel bad. There must be some psychological term for that. awkward editor's note: thanks for the facebook birthday wishes all!

I should get to work. I wish birthdays counted as a holiday. [REDACTED]
Collapse