I've always been fascinated by simulations. e.g. did you know that that there's a whole subgenre of Germany heavy machinery sims? If you've ever dreamt of operating a tractor, crane or excavation machine, look no further. The Germans also offer a hyper-realistic City Bus Simulator. It's not a a game-- there's no shooting, racing, violence. All you do is drive the bus! You collect fares, follow a route, wait for stragglers, etc. You can even operate the wheel chair lift! It's completely banal, yet oddly compelling. I get hypnotized just watching the trailer.

What was I talking about? Oh yeah simulations. Give me an interesting real life scenario over some generic fantasy world any day. I don't want to battle space aliens, I want to survive a flood. Or earthquake. I think these things have the same appeal to me as a Choose Your Own Adventure, or a text adventure-- the ability to explore life's 'garden of forking paths' , to wonder what would happen if you went left instead of right, dropped out of school instead of going to college, grew up on a farm instead of the city.

So, I was super interested when Bully came out. It's a GTA type open world game, except set in an English boarding school. It's basically a simulation of high school! You play pranks, ride a BMX around town, go to classes. Great fun. Well, except for shop class. I swear to god the reason I gave up on this game is that I could not get past shop class. I just couldn't do it. 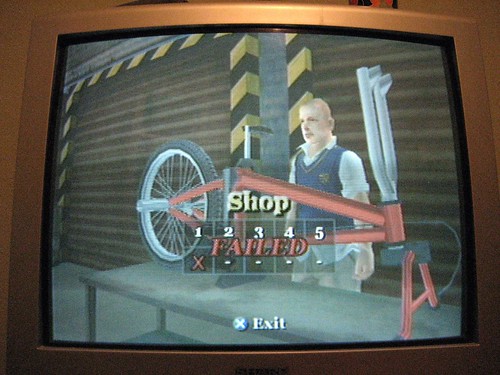 This is the most realistic simulation I have ever played

At a certain point I started to realize that a simulation of high school is actually kinda depressing. I took out my frustration/boredom on my character by forcing him to go to school each day wearing only tightie whities and a dunce cap.

This outfit resulted in a citation for violating the school dress code. GOD what a bunch of Nazi Hitlers.

Even though I ended up quitting, I have to say, the BMX bike in this game is perfectly implemented. It handles just right. It's such a sweet feeling the first time you ride it!

2. Shadow of the Colossus

This game gets mentioned a lot when people talk about games as art. It offers no exposition or back story. You ride around on a horse, moving through this mysterious barren wasteland. There's nobody around except for these monstrous, unspeaking giants that you have to kill in various ways. You climb on top of them, poke em in the eyeballs, wrastle em to the ground with rope, and so on.

In essence S.o.t.C. is a collection of epic boss battles, with all the other stuff removed. It sounds pretty fun. What nobody told me though is that 95% of the game is spent just wandering around looking for something to do! You have to seek out each boss, and they're all like 30 million miles away from each other. I got so sick of riding that damn horse. Plus everything in this game is a washed out shade of beige. I thought at first my TV wasn't adjusted right, but it's just how the game's supposed to look. The lack of contrast and samey-browness gets old fast.

Oh, about the much-trumpeted ending... (spoilers follow) So you've spent all this time riding around fighting giants, and it's not clear why. The giants never threaten you and don't attack unless provoked. You're always the one who starts shit. Well as it turns out, once you've killed them all, you realize... THE MONSTER IS YOU! Dum dum dum. "Now that's what I call art!"

I got this game on the strength of the trailer alone. The art direction is incredible! The whole game looks like an old school Chinese painting. (japanese? sorry i am a terrible student of asian art. but you know what I mean, like those cool paintings of rivers and landscapes, actually I think they are Japanese.)

In the game you play a wolf. I forget if you're a real wolf or a man who can turn into a wolf. I think the latter. Oh yeah you're a magician. That was another really cool thing about the game (in theory at least). The way you did magic was to draw out calligraphy strokes with your controller. You had a brush and could experiment with different combinations of brush strokes. You painted magic into existence. It was really cool. Unfortunately the PS2 controller is not exactly an instrument of fine art. It was like trying to paint with a bazooka. I sucked at magic.

But man, this game is beautiful. The way the world streaks when you run, the fact that you're a highly stylized wolf (I love wolves, among the most beautiful of animals), all of it, it just looks great. I'm amazed how rarely video games actually branch out into an interesting direction, art-wise. They tend to go for extreme realism, polygon counts, but who cares about realism? Parappa the Rapper, Katamari Damacy, these games were not 'realistic' and they didn't have 'good graphics' but I'll take a flat paper cutout of a rapping dog* or a 40 foot tall King and his little green cylinder head son over good graphics any day. Bah, hum bug.

The problem with Okami was (wait for it) too much walking. The game is basically Legend of Zelda except you're a wolf instead of an elf fairy or whatever Link is. Once my enchantment with the art wore off I was left with the bones of a familiar beast.

I still think you should buy this game cos the world needs more games that look like ancient Chinese paintings come to life. (or Japanese. I'm hedging my bets)


In Raw Danger you play a series of characters trapped in a flooding city, and what you do in one story interacts with the next. Like at one point you see an escaped murder suspect and you can turn her in or say nothing to the cops. Then in the next story you're the murder suspect.

The graphics and voice acting are uniformly terrible, but I like the survival elements and the story. There are some pretty funny decision trees for conversations. At one point your friend is lying unconscious on the floor and you can shake her, slap her or sniff her.


If, faced with such a choice, you have the mettle not to pick 'sniff', I raise my hat to you sir or madam.

Alas, I had to bail on this game cos it's too hard. I always end up caught by the cops or else freezing to death. Oh, that's one other thing I like-- instead of health meter, you have a body temperature meter. You get cold rapidly when exposed to the elements, especially if you're not wearing a jacket. The controller starts to shake. If you don't find shelter or a fire, eventually you get hypothermia and die.

* Or a rapping onion. 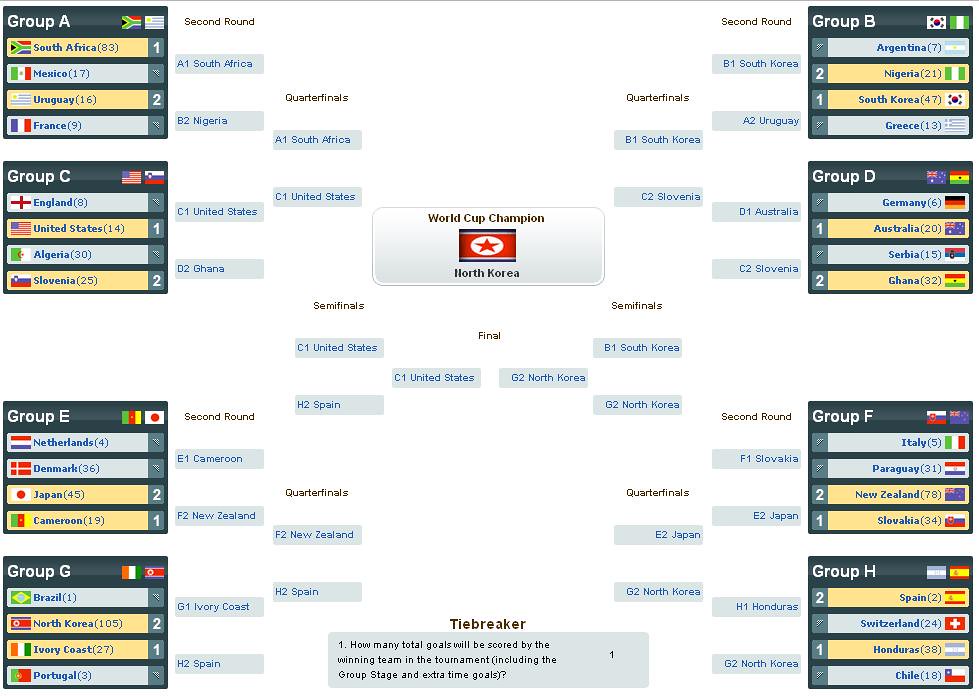 Here's my picks for the office pool. Not bloody likely, I'll admit. But how awesome would it be if the 2010 World Cup actually went down like this?

This bracket needs to be optioned by Jerry Bruckheimer and made into a major motion picture, stat. The script practically writes itself.
Collapse