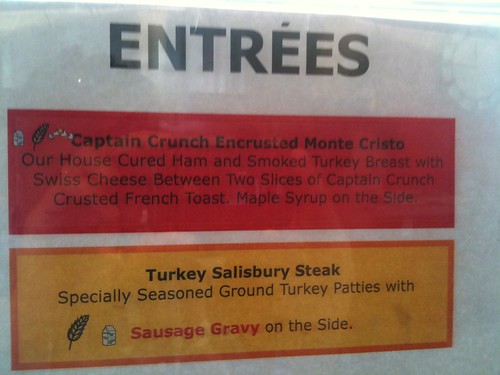 You know it's an arterioscelrotic cafeteria day when Turkey Salisbury Steak is the healthier option.

I was thinking about how rich people donate money to get their name on buildings and such. In part they must be compelled by the idea of your name/legacy living on once you're dead. This same idea accounts for why people spend a lot of money on tombs, name their kids "George Foreman Jr," build monuments/statues to themselves, etc. (Ok with monuments/statues it's sort of tacky to build them for yourself, unless you're a third world dictator or something. But you can always slip some sculptor a few Benjamins and wink wink nudge nudge your way into posterity.)

Personally, upon my death I'd like to be stuffed and mounted in a fierce fighting position. But if I had a lot of money, what I'd also do is commission someone to write a text adventure solely dedicated to simulating a conversation with me.

Imagine if Andrew Carnegie had done this! Imagine walking into some library, firing up the ol' Carnegie simulator and chatting with Mr. Moneybags himself. I'm sure it would be a major ego stroke to know that your philosophy and moral agenda could live on in this way. One's grandkids don't care about such things but they will if you also endow a fund that pays them a shiny nickle (adjusted for inflation) every time they virtua-chat with your disembodied avatar.

Amar stands resplendent before you. He looks wise beyond his years. His haircut looks expensive.

Amar says: "Look upon my works, ye Mighty, and despair!"

I don't see any "UPON WORKS" here.

You get the idea. It would take some work-- you'd have to hire some people to closely observe you and fashion a text adventure that really portrays you in a flattering, idiosyncratic light. But wouldn't it be cool?

If I were rich enough I'd hire some guy to spend his whole life working on this simulation, so it would be able to respond to most anything you throw at it. It still wouldn't pass the Turing Test, but it seems like a great way to flamboyantly spend one's wealth. Who needs Faberge eggs and private islands?
Collapse