Woke up sick. Would've stayed home from work but I have to do an interview & it's a pain to reschedule those.

One component of emotional intelligence is being able to identify where feelings come from. Sometimes you feel a certain way for the reasons you think you do; other times the real reason is something physical or otherwise unrelated to what you think the reason is.

e.g. I drove into work with a sense of foreboding. My mind was occupied with worries about the future, Izzy's education, all that. But is that really why I feel uneasy, or is it just that I'm sick? There's never a lack of things one could feel uneasy about.

California's completely fucked. It's ridiculous that it's gotten this way. The state has so much going for it, yet the inane system of govt. that allowed Prop. 13 (cap on property tax forever & ever more) to pass has caused public infrastructure & services to get increasingly bad year after year. To fund the basic things needed by modern civ-- fire stations, police, roads, schools-- the state has to issue bonds and borrow money it doesn't have and live beyond its means. The budget is locked up a million different ways, the legislature can't get anything done, and the consequence is that I live in one of the richest cities in the world and can barely imagine sending Izzy to public school there.

Move to the East Bay? I don't know, maybe. But then we have to get new jobs cos the commute over Bay Bridge is a recipe for soul murder.

I'ma eat my oatmeal and try to be constructive. Writing in LJ is mildly therapeutic but the time is usually better spent elsewhere. 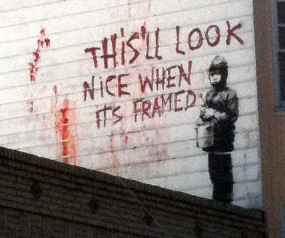 I do wanna write a column for the Pot Hill View (our local paper) about graffiti. They'll publish anything, but I'd like it to be worth reading. I've been thinking about vandalism vs public art, broken windows theory, Banksy, sidewalk stencils, crime, property ownership, etc. This metafilter thread captures a lot of the issues. Why live in the city if it's as sterile as the suburbs? But whoever tagged the bench in front of my house needs to get beaten in the kidneys till they piss blood.

Hmm perhaps I am no longer the elitist west coast liberal I once was. Or I am, but with certain blind spots.

It's not just home ownership; even when I rented it pissed me off when taggers scribble all over highway signs and store windows. Living in a hood means you have an aesthetic stake in it; you wouldn't accept a dog pissing in your doorstep to mark its territory, why must we accept the juvenile equivalent?

Send em to art jail at least, so they learn to do better work.

Took Izzy on a nice long hike this wknd with Nicole-- up at Point Reyes-- really beautiful, through the woods to the Pacific coastline. Super California hike. I feel like you have to do that kind of thing to justify living in the Bay Area. I looked out at the ocean and said "Take that, New York!"

Izzy lost her shit on the way back. Not so fun to hike with a screaming baby on your back. I guess we pushed it a little far. But I want her to grow up outdoorsy so seems good to get in the habit.

Stenciling on luggage is hard 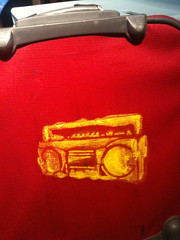