Izzy loves them to death

They babysat so me & Liska could go out for a night of stand up comedy -- Hari Kondalabu, for the 2nd time! What can I say, I'm a fan. Enjoyed his rant about white chocolate lovers... aka RACIALISTS. "Who is this product for? 'Like the taste of chocolate, but can't stand looking at it?'"

On Sunday Amma broke out the dosa pan. Also Anna made ma po tofu, my fave.

Wknd after that we leave for Barcelona.
-all I got in mind is look at buildings
-and lisping

Wknd after we're back, leave for NYC (Fraidy's wedding)

Really obsessed with Demon's Souls at the moment. If I were a younger man with young man levels of leisure time, I'd buy a PS3 just to play this game.

But I amn't so I shamn't 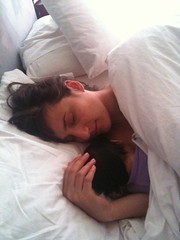 Other fish to fry
Collapse