It sounds like Blonde Redhead but isn't any of the 4 Blonde Redhead songs on my iPod.
They named themselves after a song by DNA. I've never understood what it means.
Like, fake blond? Suggestion of artifice? Who cares.

Half the time I look in a mirror these days, I honestly have no idea if I think I look cool or if I look like a total goober. Generally I suspect my hair is stupid, but then once in a while I'll see it in a picture and think, that's not so bad. (I paused to grab a representative picture but then got hung up on whether or not it looks cheesy)

Too lazy to get a haircut. Plus, a good haircut (according to Liska) will run me $75! That's ridiculous given that the Vietnamese lady on 16th will do it for $10 + tip. Granted, the only haircut I ever get is 'buzzed all around w/ a #2 clipper', and I get this because it's impossible to mess up and easy to communicate. Paying more money means you get a hair professional/therapist type-- somebody who can sense what kind of hair you want based on inarticulate descriptions and handwaving from the client .

But say I get a good, really good haircut. Then I have to pay $75 every 6 weeks? That's ridiculous.

I'ma grow my hair till I can't grow it no more. At the bar last night I made a bet with Jonathan that it won't be cut next time he sees me (month minimum). I'm going to collect.

We were all there cos D. got laid off. Such a bummer. This week was such a rollercoaster between Obama and Prop 8 and layoffs. The economy is scary right now. I feel like the worst is yet to come. I think about our mortgage a lot. We're doing ok for now, and we bought the house to live in, not to speculate. But it's still weird having so much debt when the job market and stock market and real estate market are all going south. How much can the President even do?

With all of us buying rounds for D, the issue was soon drowned to death.

Liska's bday is Tuesday. For her birthday gift, I'm getting her parfume, cos she stinks. I'm often told I have expensive taste, which sucks when it comes to buying things like perfume. I smelled a bunch that all seemed crap (overly floral, cloying, sickly sweet, etc) and when we finally encountered one that I like, it was the one that goes for $150 a bottle! It's not a big bottle either.

My bday's pretty soon after. Liska's gonna get me a subscription to Monocle magazine, which works out pretty well as it's a ridiculously unnecessary, expensive subscription that I never would have gotten for myself.

No surprises then. Surprises are overrated.

Complex instant runoff voting at Mike's place last night brought down video pool to "The Mist" and "Ironman." After M&M's were recounted, we went with The Mist. It was pretty lame though. Liska and I left before it had even finished. All the characters talked like they were in some community theater troop. None of them seemed like real people to me.

I'm fiddling around with some bits of junk we had left over from burning man.... want to eventually have something I can mount in our hallway. yellow/orange spraypaint doesn't show up on brown, so I'ma have to figure something else out there. 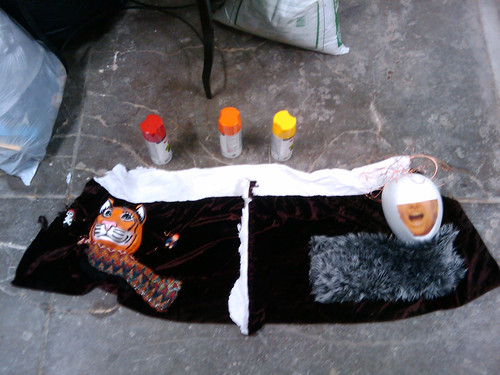 It's bigger than it looks-- maybe 4 or 5 feet long?
I wonder if the gorilla glue i used on the heads will stick. I left it overnight to set.
Time to go see.

make baby
buy perfume?
eat in the mission
ebay art research
(I'm trying to figure out if it's possible to get cool art for our home on ebay. this brings up the question, what artists do i like? so i'm going thru old giant robots to get some names of cover artists, plus throwing in some random folks like bruce nauman, damien hirst and murakami.
if it's all too expensive, the other alternative would be to buy really cheap framed paintings-- the ones that go for 1 cent-- and then paint/build on top of them. Might try that as well.)
Collapse