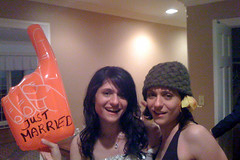 back from NYC. happy new year etc
BAM party in Brooklyn with ffriends/ffiends
they had a rec room with ping pong
afrobeat band had the crowd going bananas
afterwards king britt dj'd, but the line
was serpentine and endless.
so instead me lina and liska found ourselves
in the movie theatre watching "living dead".
"awesome, night of the living dead!"
no, my friend. what the movie turned out to
be was "living dead," episode 4 of lars von trier's
"Kingdom" series. artsy, foreign,
in swiss, subtitled, inscrutable, badly lit.
i bailed after
a half hour due to impending coma. lina said
that later on there were flesh eating zombies.
i bet they were poorly lit. 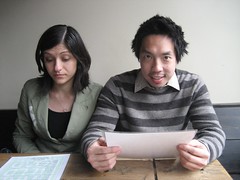 brunch-bit-o-honeys-sleepin-on-a-boat
i like sleeping on a boat,
it rocks you to sleep
when this boat's a rockin'
don't come a knockin'
shofar is not a bad ass sound
i always imagine something much better in my head 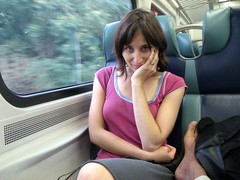 back, working hard, aj's getting married next wknd.
trying to figure out my best man speech.
i want to do a powerpoint preso. (but how?
will they have a projector available?)
Collapse