Today in the cafeteria, Sarah asked me where in Costa Rica I'm going. I said "I don't know... it starts with a Q"

Some friends are renting a house and they had someone back out, so me & Liska stepped in. We're pinch-hitters. Bench-warmers. On the "B-list"

B-listers don't plan, they show up

Doing a DB push. You know how right now YouTube says "We are currently performing site maintenance. Be cool - we'll be back 100% in a bit." ?

ALL ME BABY! Well me and a crack team of other people who know what they're doing

But that message on m.youtube.com... all me baby 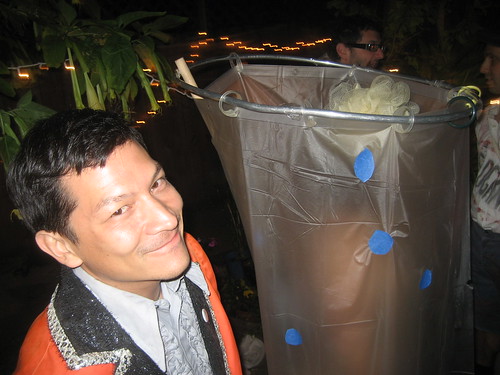 Fig. A: they laugh at me, and yet Liska dresses as the shower costume from Karate Kid and Jason appears to be auditioning to host a game show on public access TV!

Been trying to teach myself Traktor. Beat matching is hard. I know you're supposed to learn by juggling two copies of one record, but that sounds so boring.

I had this idea for a mix, "songs that only make sense on a system with good bass." It seems like bass is fundamental to a lot of types of music, but some more than others. Like classic rock doesn't need it, but hip hop/electronic does. I wonder if the deep sub-woofer tones you hear in certain modern songs are deeper than anything that came before.

It's probably just 21st century arrogance on my part even thinking so. I mean, gongs are super deep, and they're ancient.

In high school I was friends with this guy Greg. He was very into his car's sound system. He had military-grade subwoofers. You know how sometimes a car will roll by and the bass will be so ridiculously loud that windows start to rattle and you can feel your clothes vibrating? Greg's car was like that.

I remember one time he was playing something-- very heavy, BOOM BOOM BOOM, and I asked him what it was. He replied, "Bass." Well yes there is certainly bass in this music, but who's the group? "It's just bass, man." He handed me the CD. It was a compilation, "Best of Bass Vol. 4." All the artists had names like "Bass2Dark" and "Basstronic" and "Bass Crew". Haha
Collapse