In Montreal, the modern art museum was showing a retrospective of Bruce Nauman, whose work I wasn’t familiar with. He strikes me as a pretty cool artist. He did a lot of neon light works but then moved on to completely different mediums. There was a water fountain populated by 100 bronze fish who slowly bled out water. I thought it was really beautiful. 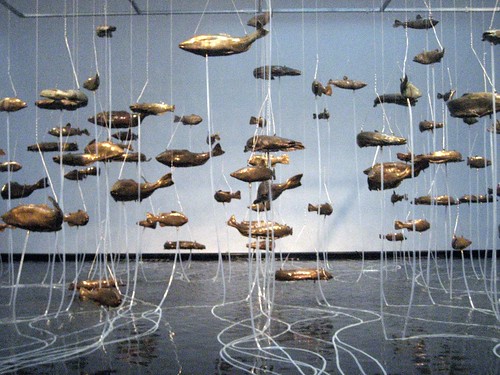 Other works were more confrontational and/or humorous. A lot of his neon stuff featured dudes whose penises (penii?) periodically lit up into erections, in that diner-sign animation way.

He also had a bunch of video installations on display. One room had a bunch of short video clips with Nauman portraying a “tortured clown.” The various projections showed him sitting on the toilet, tripping through doors, etc. It wasn’t that impressive, given how cliched the notion of sad clowns has become.

What I liked more was this crazy room that featured six very large videos of Nauman, headshots that constantly rotated and some of which were upside down. All the heads were screaming eerie phrases that you couldn’t quite make out. The screams did gel together into a musical (or at least harmonic) sound , but overall the effect was creepy, hilarious and memorable. “FEED ME / EAT ME / ANTHROPOLOGY,” that was one of the things the heads said. But they said it in this super loud scary drone that rose and fell in pitch. Haha I went around doing that for several hours after we saw the exhibit.