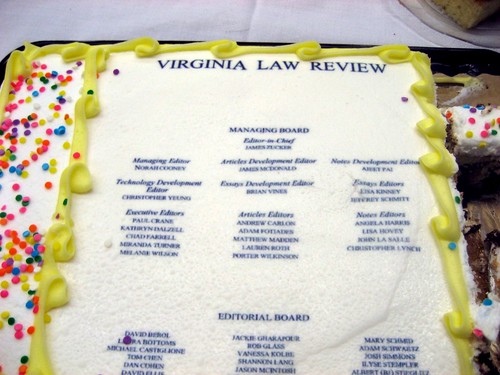 Went to the gym today, first time since I threw out my back. It felt good to move, though any time I felt a twinge in my hamstrings or back, it scared me. Seems like the worst part of a healed injury is the shadow it casts. On the treadmill, I found myself hesitating, holding back where normally I'd have plunged ahead. Part of it was just being out of shape, but it was also fear of getting hurt again.

Nevertheless (taps heart) this here's a finely tuned machine. I ended up running 6 miles at a good clip. I wonder sometimes, how far I could run if pushed to the limit? I think the most I've done is 10 miles, but with a gun at my back? 15 at least. The barrier is more mental than physical.

We got back from Virginia on Tuesday night. My brother AJ's graduation was something else. He was the top student in his class! I mean literally number 1 out of 360 students!

In addition to getting the best grades, he also won the top student honor, chosen by faculty vote. The M.G. Hyde award is given "to the student whose scholarship, character, personality, activities in the affairs of the school, and promise of efficiency have entitled him or her to special recognition." In his remarks, the dean took pains to point out that the student with the highest grades isn't necessarily the one who gets chosen for the M.G. Hyde award; it just so happened that this year my brother won both.

Sorry, I know it's obnoxious to brag. But it was really the most remarkable honor received by any Pai to date. UVA's a top ten law school, so presumably the other 359 students were nothing to sneeze at. One of AJ's profs actually used the phrase "rock star" when describing him. (Abuse of the term, I know-- it's like when physicists say string theory is 'sexy.')

Ok enough boasting about Pai Jr. The important take-aways are

1) I taught him everything he knows, and
2) I'll still inherit the entirety of our family's wealth* due to the ancient law of Primogeniture.


Michael Mayer & Gui Boratto are dj-ing at Mezzanine tomorrow. Gui Boratto is a Brazilian producer who wrote "Arquipelago," one of my all time favorite techno tunes. If you didn't download it when reading Amar's Best of Techno 2006 or if (is this even possible?) you didn't read Amar's Best of Techno 2006, don't panic. Here it is again. Please take this opportunity to contemplate the error of your ways.

* Including the cat
Collapse