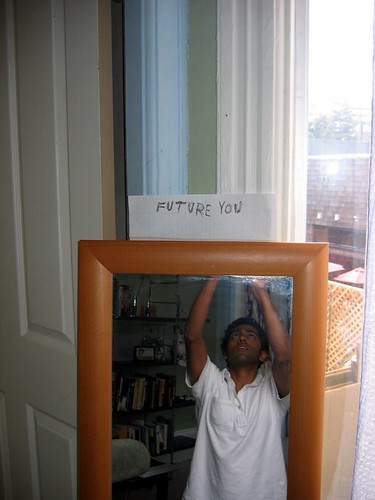 future you, originally uploaded by jcruelty.

This makes no sense really. What you see in the mirror is technically the past, not the future, so it should actually say "old you." But wouldn't it be cool if there really was a mirror that showed future you? You could figure out exactly when to schedule your next haircut.

I'm drenched with sweat from biking around in San Francisco's heat wave, but too lazy as yet to shower. I peeled out on Market St. on my way to my brother's house, and was annoyed that the second my hands touched the street, they smelled like piss and vomit. STREETS SHOULD NOT SMELL LIKE PISS AND VOMIT!!! I will vote for anybody who runs on this platform.

Why am I writing in LJ? I should be cleaning our house, which has a weird smell (which could be me). Or if writing, should be writing for reals... whatever that means.

Sometimes I think the immediacy of livejournal (and the enjoyment one gets from posting an entry and seeing it up) keeps me from developing better writing habits. It's so easy to put something up instantaneously, without taking the time to edit it, but nothing good gets written without editing.

Not that I never edit old stuff-- I do. Spent some time yesterday reworking candy reviews and that overlong essay on The Fall that nobody read, not that I blame you. But really, I shouldn't be publishing these things in the first place. Need to learn patience. Write a draft and leave it in the drawer, don't push it out till it's done.

My brother is living in North Beach for the summer. His roofdeck has a beautiful view of Golden Gate Bridge and the sailboats in the bay. It was so hot today that when we sat on the deck drinking beers, we'd only be halfway through a beer by the time it got warm. I drank 3 half bottles of beer, so only 1.5 really... that's not so bad.

csection was right about "Can You Break A Brick Down," it's a hot hot single. I like New Orleans "bounce music." The combination of tuba and trunk-rattling bass really does make you bounce. I wonder if it's true that New Orleans's murder rate is at an all time high. Wouldn't surprise me.