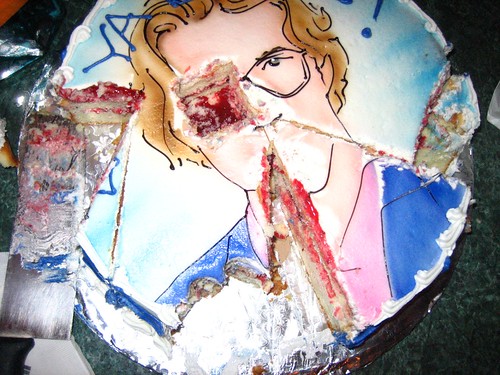 I was content with a normal slice, but Nick had to gouge out an eye. Typical.

Reading some good books - Tibor Kalman, Perverse Optimist, a retrospective of brilliant designer Tibor Kalman (RIP), and Out of Sheer Rage, a funny, failed attempt by Geoff Dyer to write a "sober, academic" study of D. H. Lawrence. Dyer quotes in passing a lot of authors I've never read, like Rilke, who said "Il faut travailler, rien que travailler." (It is necessary to work, to only work.) I guess Rilke didn't get out much.

Me on the other hand... my poetry gets written on a Scrabble board. Tonight I met up with Angi at Frjtz, where we drew letters out of a bag and drank Belgian beer that tasted like apple juice. I had yogurt-peanut sauce with my fries and she had wasabi mayo. The heat lamps kept winter at bay.

Been thinking about the year that was. Hard to get a handle on all that happened; politically a disaster, personally less so. Year in review forthcoming, if I'm not too lazy to do it.

Shut up Rilke. Nobody asked you.